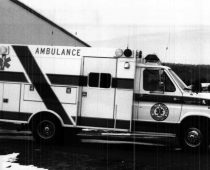 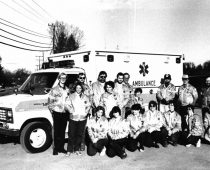 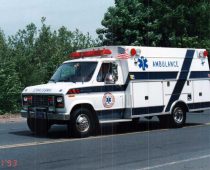 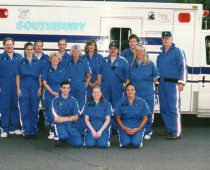 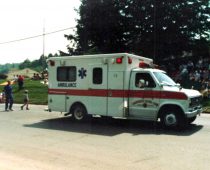 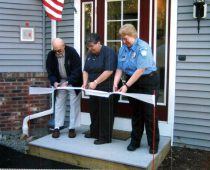 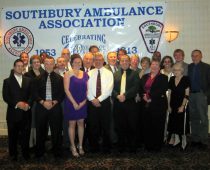 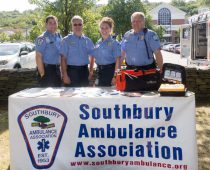 In 1953 the Southbury Lions Club started the Southbury Ambulance Association (SAA). The Lions Club members used their own funds to purchase a 1949 Packard ambulance. The Club later reimbursed them for this expense. Originally, SAA was supported by the annual Ham and Bean Dinner held by the Lions Club and augmented by memorial contributions and donations. The ambulance was housed under the Briarwood, known for the coffee cup displayed on the roof. This establishment was later known as the Three Gables and is now known as 88 Main St. South. In 1971 a used ambulance from SAA was purchased in order to form the Heritage Village Ambulance Corporation. The purchase price was modest; only enough to render the transaction legal. SAA was instrumental in assisting Heritage Village to begin with their new venture.

Until 1975, SAA was dispatched by telephone. This meant that when members were on call, they had to remain near the phone at all times (no call waiting or cell phones!). Dispatch duties were first handled by Southbury Training School. From 1974 to 1978 Woodbury Answering Service and then Southbury Answering Service supplied services. Shortly thereafter the Town of Southbury created a dispatch center for fire and ambulance which continues to today for 24 hours, 7 days a week coverage for emergency calls. In 1975 SAA obtained a used paging system and a base radio that finally freed on call members from their telephones. Today, SAA uses a modern 9-1-1 system and responds to calls received by the dispatch center housed at the Southbury Police Department.

The Town of Woodbury did not have its own ambulance service initially and depended on SAA to respond to ambulance requests in their town. Primary Service Areas (PSA’s), as we know them today, simply did not exist. Ambulance services were regulated by the Ambulance Commission, which fell under the control of the Connecticut Public Utilities Commission. The Office of Emergency Medical Services (OEMS) was formed in 1975 and authority transferred to the Connecticut Department of Public Health Services. Hartford Hospital offered one of the first EMT courses in 1972. SAA members were among the first to complete EMT training in the early 1970’s.

Between 1976 and 1979 SAA encountered difficulties maintaining sufficient crew levels. At that time, only members of the Lions Club were allowed to join SAA. There were times when as few as 13 active EMT’s were available to “man” crews!

The years 1977 – 1978 saw some serious changes for SAA. The membership restriction was lifted and anyone with an interest in helping their neighbors could ride, with minimal required training – First Aid and CPR certification. In addition, Woodbury Ambulance Association was formed, which removed a burden from SAA. Also, in 1978, SAA purchased its first modular ambulance. By this time new state and federal regulations specified the type of vehicle needed to meet their requirements.

By 1980, the increased cost of operating the ambulance service prompted members to initiate a fund drive appeal letter that was mailed to all Southbury residents. The letter requested contributions to help defray expenses, which was longer able to be covered with the Ham and Bean Dinner and memorial donations alone.

In the mid 1980”s, SAA certification increased to IV Tech Level. Two years later, due to changing protocols and diminishing personnel, SAA reverted back to Basic Life Support Level (BLS). In 1993, SAA members became certified in defibrillation. Soon to follow was the Epi-pen certification. Presently, SAA is certified as EMT-B/Defibrillation service, with paramedic intercept provided on an as needed basis by Campion Ambulance out of Waterbury.

The operating budget of SAA in 1997 was in excess of $50,000.00. This figure does not reflect the monetary value of the thousands of hours donated by SAA volunteers who gave and continue to give freely and willingly of their time and care for the residents of Southbury and of those who suffer illness, injury or accident while in town. Today SAA responds to more than 1,800 emergency requests for ambulance service each year. SAA also provides backup coverage for Heritage Village Ambulance and Southbury Training School Fire Department Ambulance. These services were provided at no cost to the patient until 2000.

There were many attempts to find a permanent home for SAA. Land was donated to the Association, but the cost of construction and other considerations made it impossible to build and the land was returned. It is important to note that SAA as well as Heritage Village Ambulance Association receive absolutely NO FUNDING from the Town of Southbury. All costs and expenditures are borne by the association and paid for with other revenues raised through the efforts of the membership, billing of patients insurance and/or through donations. In 2001 SAA was forced to contract for assistance with staffing to meet the requirements of OEMS.

SAA continued to grow and meet the everyday needs of the community of Southbury. In May 2001, SAA purchased a second ambulance. A third ambulance was purchased in March of 2007. The continued search for a home of our own finally became a reality. SAA purchased the former Sacred Heart Church Rectory at 68 Georges Hill Rd in December 2006 and officially moved into the new facility in August 2007. SAA created a website, email and online scheduling in 2006 to improve communication within.

SAA has been a leader in EMS in the community. In May 2010 SAA received the Governor/s Annual EMS Volunteer Organization Achievement Award. Partnering with Pomperaug High School we offered numerous EMT classes to students. In addition, SAA offered and today continues to offer a variety of CPR, First Responder, First Aid, public and education, and emergency preparedness classes to people throughout the community: Lifeguards, teachers, families, scouts, neighborhood watch groups, churches and town employees are just a few of the beneficiaries of SAA community education and awareness programs.

SAA leads by example in its community supports neighboring communities. Through community interaction, support and development of its volunteer members, SAA is a leader in Connecticut’s EMS system and as such has made a lasting impact, not only for residents of Southbury, but for our surrounding towns.

Since 2010 SAA hosted a town-wide Amber Alert registration session along with the Danbury Rotary Club which has now expanded to include participation from the Southbury Police Department, Fire Department, Dr. Kest’s dental office, the Southbury Senior ,Center, the Alzheimer Foundation and local non-profit organizations in town providing relevant information to residents on an annual basis.

SAA continues to replace ambulances as needed including the purchase of a new vehicle in 2015 staying ahead of the continuing needs and trends in EMS transportation and service. Plans for additional equipment are also underway along with focusing on the upcoming needs of EMS personnel to service the Town of Southbury and surrounding areas.

SAA lead the effort to have the Town of Southbury become Heart Safe and insures that this recognition is ongoing by offering CPR classes and training both EMS personnel, residents and friends in the area. SAA participates in the annual Memorial Day parade, Southbury Celebration and town-wide volunteer fair supporting our town and showing support for our neighbors.

Participating in the town-wide safety drills has now been a part of on-going business at SAA ensuring that the EMS needs of the residents and visitors to Southbury are our top priority. These town-wide meetings help SAA review any policies or procedures that need to be updated to provide the best possible response and service in times of disaster or storms.

SAA is truly a volunteer driven organization which operates solely for the benefit of the Town of Southbury. We are your neighbors, the high school student, the man across the street, the store clerk, the business executive, the mother of your child’s best friend, the Little League coach, your carpenter, the mail carriers, the school nurse. We spend countless unpaid hours maintaining and updating our skills and knowledge. We are here for you when you need us. We care because we are “neighbors helping neighbors since 1953.” Our members range from their teens to senior citizens, all working together in our community.